Welcome to our Garden Party! Join the Chicago North Shore Alumnae Panhellenic Association for our annual Scholarship Benefit, as we celebrate sorority women. Money raised from your kind donations, our silent auction, wine pull, and raffle, will help us award scholarships to deserving women currently initiated as members of an National Panhellenic Conference sorority, and help them flourish.

Beginning at 12:00 p.m., live music will be provided by Quartet Vista, from the Midwest Young Artists Conservatory. There will be a silent auction, wine pull, raffle, and cash bar. At 1:00 p.m., a seated luncheon, dessert, and presentation.

Tickets are $65.00. You may RSVP by check or online at gardenparty-scholarship.eventbrite.com or on Venmo @CNSAP-Alumnae. Responses by mail or check must be received by June 3, 2022; online responses will be accepted until June 7, 2022.

See our invitation and RSVP card to share with your organization, plus additional details on our Scholarship Dinner Benefit 2022 page.

Congratulations to our 2021 Scholarship Winners

The Chicago North Shore Alumnae Panhellenic Association presented $1,000 scholarships to three college students from our area who are leaders in their sororities at their respective college and universities. The young women were selected based on their outstanding academic records, their involvement and leadership on campus, and in community activities.

Erica Mostovoy of Buffalo Grove, IL, received an Academic Scholarship. Erica is a member of Zeta Tau Alpha Fraternity at the University of Miami, Coral Gables, Florida. She graduated from Stevenson High School and is pursuing both an undergraduate degree in Business Analytics and Economics with a minor in Mathematics, and an Accelerated Master in Business Analytics. Erica has served Zeta Tau Alpha as Treasurer, as a Business School Team Leader for 7 freshmen, and was selected for Order of Omega, Greek Honors Society, for which she serves as Treasurer. She has also been involved in Making Strides Against Breast Cancer during her collegiate years.

Olivia Stensberg of Wilmette IL, also received an Academic Scholarship. Olivia is a graduate of New Trier High School. She attended TCU and transferred after her first year to Lake Forest College, where she is majoring in Communications. Olivia is a Richter Scholar and is involved in undergraduate research. She will enter her senior year next year. She is a member of student government, an academic mentor, and a member of the Student Programming Board. She has served Delta Gamma Fraternity as VP Communication, VP Member Education, and Director of Continuous Open Bidding. Olivia was instrumental in helping her Eta Mu chapter secure the largest fall New Member class in the chapter’s history. She has been on the Dean’s List numerous terms and earned the DG Lamp of Knowledge for earning a 4.0 gpa last semester.

Madalyn Riehm of Vernon Hills IL, is receiving the Service Scholarship. Maddie is a graduate of Vernon Hills High School and now attends Mississippi State University in Starkville, MS. She is studying accounting and has been inducted in numerous academic honoraries. A member of Alpha Delta Pi sorority, Maddie has served as VP Finance for her chapter. She is a member of the Accounting/Finance Club, and serves as a college mentor. Maddie has been a volunteer in her church nursery for a number of years, has helped build a house for Habitat for Humanity, has worked with the Ronald McDonald House in Jackson, Mississippi, as well as with the house in Memphis, Tennessee. Maddie was especially drawn to Alpha Delta Pi sorority’s philanthropy, the Ronald McDonald House Charities. 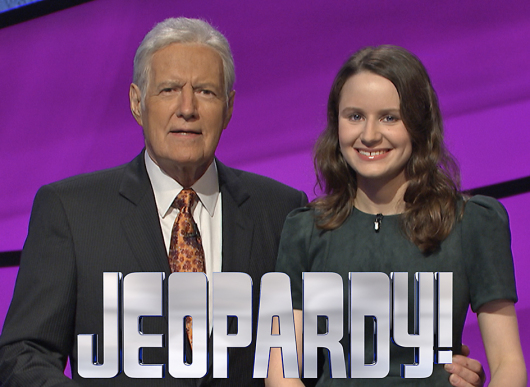 In November of 2019, Alex Damisch won three games on the popular TV show "Jeopardy," securing her status as a "Jeopardy" Champion. Alex, a data scientist, is a long-time participant in academic competitions. She was involved in quizbowl in Jr. High, as an undergrad at Lawrence University in Wisconsin, and as a graduate student of DePaul University. Currently, Alex keeps up her skills regularly playing trivia with her data scientist teammates in Logan Square. The team is appropriately named "She blinded me with data science."

Alex is a Kappa Alpha Theta alumnae from Northbrook, while her mother Patty Damisch, a Gamma Phi Beta, is on the Chicago North Shore Alumnae Panhellenic board. Articles on Alex's experience and success can be found in the Nov. 29, Dec. 2, and Dec. 3 issues of the Chicago Tribune. Also, in the Logan Square neighborhood publication Block Club Chicago.

There were two sisterhood afternoons of sorting books in October, 2019, as we assisted the Bernie's Book Bank staff in preparing new and used children's books for distribution throughout Chicagoland.

CNSA Panhellenic President Linda Grandolfo (top rt; Alpha Omicron Pi) and Beth Kemp (center; Kappa Kappa Gamma) joined the Chicago North Shore Alumnae Chapter of Kappa Alpha Theta on October 19. Then, on October 22, our Panhellenic women gave even more. Our chapter gathered to help process, sort, and organize quality new and gently used children’s books to significantly increase book ownership among at-risk infants, toddlers, and school-aged children. Volunteering has proven to be a rewarding opportunity for sorority sisters, friends, and family members, as we pitched in to give back. We enjoyed the teamwork and knowing our efforts were going towards such a worthy cause. Way to go, Panhellenic! 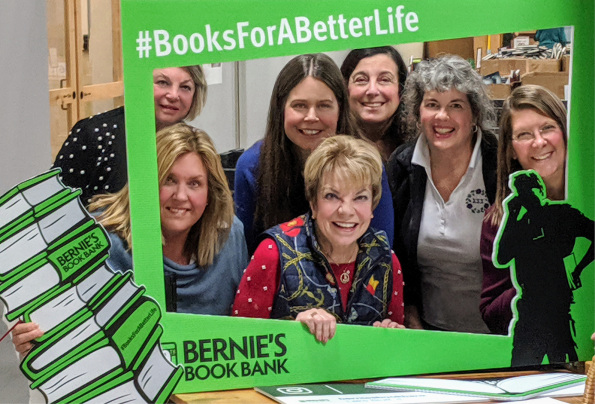 In October, 2018, during the National Panhellenic Conference annual meeting, the board of directors approved revised governing documents that allow for the development of a new organizational and governance structure designed to make the Conference more nimble and responsive to the most pressing challenges facing students, campus partners and the greater Panhellenic community.

About Our CNSA Panhellenic Members

Our membership draws from across the north suburbs of the Chicagoland area. We bring women of all ages and all member sororities together, working for the common goals of philanthropy and community service.

Our Delegates meet regularly at different locations to plan the next annual Scholarship Benefit, The Sorority Life informational gatherings, exchange ideas, socialize, and make other important decisions that will bring positve effects to our Chicago North Shore community.

Want to Become a Member?

We established this Association because we encourage all women to investigate what belonging to a sorority can mean to them. We are proud of our contributions and service to our communities, believing that being a sorority member has helped us become well-rounded, more considerate, and giving individuals.

There are members of all ages in our group who share our passion for volunteerism and philanthropy. We are always pleased to welcome new members who bring a breath of fresh air and new ideas to the group.

Do you know a young women who is interested in going through sorority recruitment? We would be happy to provide a recommendation. You can learn more in the Collegiate Events and Recommendations section on our links menu or contacting us at northshoresororityinfo@gmail.com. We will be happy to help you!