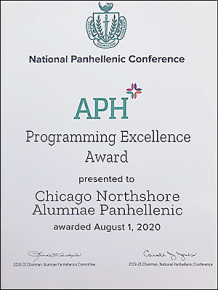 The NPC is the umbrella organization for 26 national and international sororities. We did well!